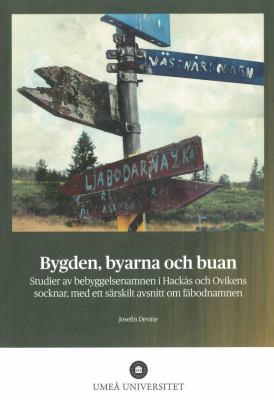 Innehållsbeskrivning
The purpose of this study is to investigate the etymological background of the settlement names in the parishes of Hackås and Oviken in the province of Jämtland, and use the names to elucidate the settlement history of the area. Another purpose is to discuss the relationship between, and the semantic development of, the name element and common noun ås. Furthermore, the purpose is to describe the name usage and the name continuity amongst the summer farm names. The selection of names is based on the principles used in the publication series Sveriges ortnamn [The place-names of Sweden], in which this study will be incorporated. In essence, that includes parish names, village names and names of independent farms. In addition to that, summer farm names are analysed. The material has primarily been collected from the Place-name Archive in Uppsala (OAU), and then supplemented through extracting name forms from historical maps and different land registry records. Regarding the summer farm names, workshops have been conducted in collaboration with the local community associations in Hackås and Oviken, which have been the basis for the name continuity discussion. The summer farm names are also morphologically and semantically analysed to reveal patterns in construction and usage.  The linguistic analysis of the individual village names in Hackås and Oviken, together with archaeological finds, suggest that there was an Iron Age community in Hackås, while the Oviken area has been used for example as fishing/hunting grounds and was colonised to a greater extent in the medieval era. In Hackås there are several place-names judged to be pre-Christian, such as Hov, Sanne, Salom and the several names constructed with -sta(d). Oviken parish show signs of quick settlement expansion, such as the large number of names with (-)ås or -gård. The name element ås has, because of a large number of medieval settlements founded around the same time, also started to function as
denoting settlements, side by side with the nature-describing meaning carried by the common noun. This explains the number of names containing -ås denoting places that does not show the usual characteristics for an ås. Results of the summer farm name analysis show typical structures; summer farm names are often compound and reference ownership/usership or the location. The name usage is an oral rather than written practise. Name continuity for summer farm names has decreased during the last decades as transhumance is no longer widely practised, and several names in the study are unknown to locals.